I am not gonna lie, I don’t mind two in diapers. I would let Ian wait till he was ready. The reason we are going to push it is he is reaching the age where people have started making judgmental comments about him being in diapers.

So this year we are going no where for Thanksgiving and Ian has no school the while week. So as of yesterday and a long conversation with Abby, it was decided that I am going to stop avoiding it and bring on the potty training. You my wonder why I am blogging about so far in advance. Well I am gonna need advice, mama support and a bit of push.

So wish us luck, here we go.

I don’t remember it being so hard with Ian. Ollie on the other hand isn’t really interested, we have tried everything water, milk, juice (yes we did, judge away 2 oz is not going to kill him). 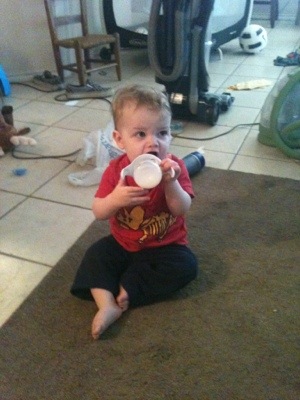 Now he can and will fake it. He might even take a drink or two. Then he just hauls it around like it a favorite old toy.

We have tried both soft spout and hard. No we haven’t tried the straw kind mainly because I hate cleaning them.

So mama’s any tips to help me get him to drink from a sippy cup?

I can now call my self a Soccer Mom, no the minivan is not next. I just can’t go that far.   Ian has completed his firs season of Ankle biters soccer, I love the name of his age group.  We had lots of ups and downs, some games he didn’t even play. He was there just preferred sitting on the sidelines.

I think we all learned something this spring season. Ian got exposed to kids his own age, even if he waasn’t always happy to be there. We learned that he plays better if I am not there.

His coach said that they will be coaching again in the fall and we can request them if we choose. I think we will, they were great with the kids.

Ian got his first trophy and he loves it. So my sports mom days are here, I know that it will a new adventure from here. 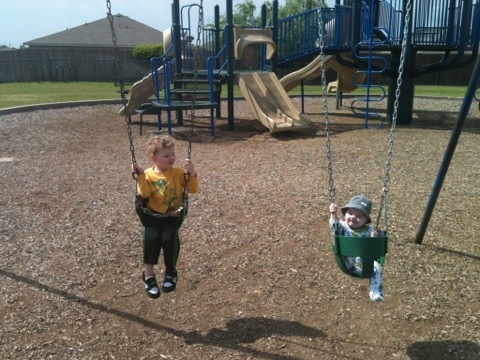 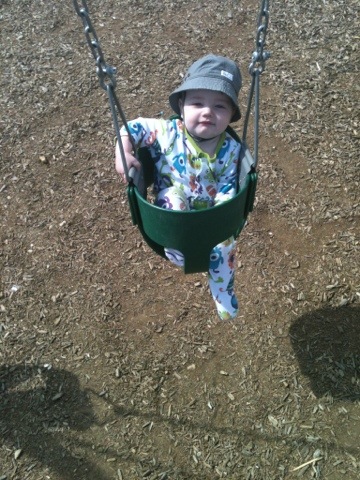 We didn’t plan to go that far, I was wearing flip flops and all we have is a sit and stand stroller but it was nice and we all came back in a better mood.

If you follow me on twitter you know that I recently sought help for some mental health issues. The help ended with a stay in the mental health hospital, I am not going to lie it wasn’t all puppies and rainbows. It was help I needed and help I am glad that I got. There is help out there, I am writing this post to help share some of the resources out there.

I wouldn’t have even known where to start with out the amazing ladies of #PPDCHAT hashtag on twitter, ran/founded by the amazing Lauren she also owns My Postpartum Voice. Thanks to her and the other ladies, I was led to the other resources that helped me.

Resource #1
I don’t know about other states but in the state of Texas, each county has a MHMR. I am pretty sure this is the statewide 24 hour crisis number they ask your location when you call.
1-800-762-0157

There are many more resources that I don’t know of and don’t list here. If you know of more and would like to add them to the comments please feel free. I am lucky that these resources were there for me and I want to share so that I can help at least one person.

Last week I was at my wits end with Ian, I desperately needed to reconnect with him. I can imagine he needed it to by his actions. Well Saturday mornign rolled around and my mom called. She wanted to take Ian and I to the lego discovery center, well that idea didn’t pan out when we realized that it is best to buy tickets in advance. So instead we went to the first circle of Hell (aka Chuck E Cheese).

Where he played everything from whack a mole to skee ball and everything in between. After a bout an hour he realized there was food to be had. Luckily he was okay with going to eat somewhere else, I think all the noise and excitement was getting to be a bit much at that point. After a brief pit stop and with fuller bellies. My Mama had the bright idea to stop at Bass Pro Shop and wonder about. Believe it or not I am pretty sure it was a bigger hit the Chuck E Cheese.

I don’t have a picture of him fishing but they had a fishing display set up for small children, and he figured that out super fast. His reaction to all the boats was pretty priceless, he said “Big Boats, Yay.”

He wasn’t so sure about this fake shark.

I think the best part was when he say all the boats and turned to my Mama saying “I buy a boat, okay Mimi.” Thanks to my Mama, he now keeps telling me about the big snake. They have a rattlesnake display in the store, and boy do I hate snakes. So between hearing about fishes, snakes, and big boats; I don’t think this is a day he will soon to forget.

A friendly reminder that I have made the switch to wordpress, so if you were a Google Friend Connect Follower you will need to resubscribe. Thanks again.

Things that make Sundays perfect, bicycle rides with Ian. The bicycle rides then turned into coloring on the sidewalk with chalk and a game of soccer.

This day didn’t start off,  don’t you all wake up late because your kids actually slept in. Which means missing church, dang it means I need to start setting an alarm.  So my mom and I went and ran a few errands, you know buying stuff to bribe Ian to use the potty.  I am proud to say we bought him some books at half price, if he goes all day he gets a book.  Lets hope this works, or I might need to buy stock in up and up. And picking up the all important dish detergent, am I missing something we got the last box on the shelf at Target. Also they didn’t have much liquid detergent either. Hmm the wonders of the world.

Arriving home, I thought forget folding laundry and all the other things that need to be done. I am going to go outside and enjoy the weather and my boys while they are little. Out came the pack and play so Ollie could watch. Anyone have any advice on how to include Ollie more in outside play? We romped and played for 2 plus hours.

When I had to return to reality and wash Casey some work clothes, feed my children dinner, and clean my main floor’s floors so I can lay down my new rug. All and All it was a great weekend, how was yours?